*UPDATE: The email host has been changed so there should not be a problem.*

Hosting a Minecraft birthday party does not need to cost a ton of money. If you are willing to spend some time on preparation and a little elbow grease. Seriously, you could easily have an epic party with these Minecraft party ideas while keeping your budget intact.

If you are feeling kind of clueless because your children are rattling on about how they love Minecraft and want a Minecraft birthday party but you can’t tell a creeper from an enderman and wouldn’t be able to find the Nether if your life depended on it, have no fear! These Minecraft birthday party ideas helped create an amazing party for my son and I am sharing everything I found and created with you.

The main Minecraft party area was considered the Overworld. Since the Overworld is where Steve builds his shelter and gathers food, the majority of our party was in this area including the refreshments.

Nighttime in the Overworld is dangerous for Steve because lots of creatures (called mobs) come out to pillage the local village and try to kill Steve. Among those mobs are giant spiders.

To create a spider, all you need is black crepe streamers and black balloons. If you want to add two red eyes to your spider face you can, but I stuck with the basics and attached it to the wall using clear packing tape.

Portals were made from black crepe streamers cut and taped to purple crepe streamers. I also think a purple shimmer curtain would be an awesome portal but I was trying to save a little money.

Through one portal was the End, the area of the house where I did not want the children to spend a lot of time (in the children’s bedrooms). Since the bathroom was in this part of the house, I made sure to add a few Minecraft plush toys as decoration, such as an Ender Dragon and Enderman near the bathroom sink.

Another portal took the children outside to “the Nether” where we had Minecraft party games.

The party cups and goody bags for our Minecraft party were also a DIY project.

I grabbed a thick piece of cellophane from a package (the kind of clear plastic you find on a box containing a Barbie doll but any thick paper would do) to create a stencil of a creeper face.

By the way, creepers are creatures in the Overworld that contain TNT and will blow up when provoked… just in case you were wondering.

Then, I used a damp sponge and black paint to gently dab a creeper face on green paper bags and green paper cups.

The Minecraft goody bags were used during the party games for collecting gems and candy.

Creating party games to go with our Minecraft-themed party took some creativity, but the children loved everything, leaving me to feel like “Mom of the Year.”

In Minecraft, Steve is able to toss ender pearls and be transported to where the ender pearl lands. Plus, he is always trying to collect precious materials and gems to create weapons, for trading, and more.

For our first game, I used the rules for bocce and children stand behind a line to toss “ender pearls” at a pile of “gemstones.” Each child took a turn tossing one ender pearl at the pile of gems. The child with the ender pearl closest to the pile won the gems.

The “ender pearls” were simple to make. I purchased green tissue paper and styrofoam balls, covering each ball with the tissue and securing with clear packaging tape.

The gemstones are available in bulk at Amazon.

Abiding in “the Nether” are ghasts, ghost-like creatures that spit fireballs at Steve. He must shoot arrows at the ghasts in order to kill them.

Since real arrows where out of the question, I created a ghast pinata using a packing box, white copy paper, and printable of the ghast face.

To create the ghast pinata, I poked a hole through the top of the box to install a wire coat hanger twisted into a hook. Then, I filled the box with candy: Hershey nuggets to represent gold, wrapped gumballs in various colors to represent the other gems, and miscellaneous other candy.

Instead of using paper mache to cover the Minecraft pinata, I simply taped the copy paper on the box. No need to dry and it work out really well.

This was my favorite part! Creating the Minecraft party favors was simple and very easy on the budget.

I used simple, clear favor bags, curly ribbon, and printed a postcard to attach to each bag. Included in each party favor bag was:

I also printed and laminated different Minecraft character masks. The children attending the Minecraft birthday party loved picking which character they wanted to be. We punched a hole in each side and used an elastic string to tie from side to side, fitting the mask to each child’s face.

The Creeper candy wrapper easily fits around a chocolate bar. You just secure it with a piece of tape. My kids love getting a FULL chocolate bar in their party favors so I have gotten used to doing this for every party.

I might have splurged a little on the party poppers. Walmart had a pack in the party section  but you can also purchase party poppers through Amazon. Then, just cut the TNT wrappers and secure with tape.

Be aware that party poppers contain a trace amount of gunpowder and should only be operated with adult supervision.

Wondering what food to serve at a Minecraft party? Creating a Minecraft menu is actually easy when you think about all the food options Steve has in the Overworld.

The food was actually the most expensive part of our Minecraft party but it feeds a ton of people (and we had leftovers for days.

Lava Floats were a HUGE hit and they are simple. Just place a scoop of strawberry ice cream or frozen yogurt in a party cup. Then, pour orange soda over the ice cream.

I was able to get black and green straws on clearance after Halloween.

No, I did not make my cakes from scratch. I totally used cake mixes, but they were still yummy.

The Grass Blocks are simply a chocolate sheet cake, iced in chocolate, and then cut into squares. Add “grass” with green jimmies.

Creating a Minecraft Cake requires a square baking pan or trimming a larger sheet cake into a square shape. I covered vanilla cake with vanilla frosting. Then, I topped it with marshmallow fondant.

If I could go back, I would have made the Minecraft Cake a two layer dessert simply because it is so big in the game. But, my son did not notice the scaling problem that nagged at me. He was thrilled as it was.

At the end of the night, our guests went home happy. My children were happy. I was happy.

As I tucked my son into bed, he said, “Mommy, that was the most epic Minecraft party EVER.” His words were an amazing gift.

Get all of my Minecraft Party Printables for FREE!

If your children love Minecraft like my kids do, then a Minecraft birthday party is not enough to keep them thrilled for long, but you can keep the fun going with these other ideas. 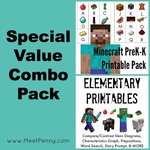 Subscribe and receive the MEGA Minecraft Printable Pack for FREE.

Hi! I'm Tabitha. Yes, I know that you expected someone named "Penny," but there is a bit of a story … END_OF_DOCUMENT_TOKEN_TO_BE_REPLACED